How wizard! Harry Potter tours in the UK

From the Leaky Cauldron to Hogwarts, fans of the Harry Potter books and films are lining up to visit the locations of their favourite magical series. This article looks at the highlights of Harry Potter tours in the UK and gives information on what’s on offer for Potter pilgrims. 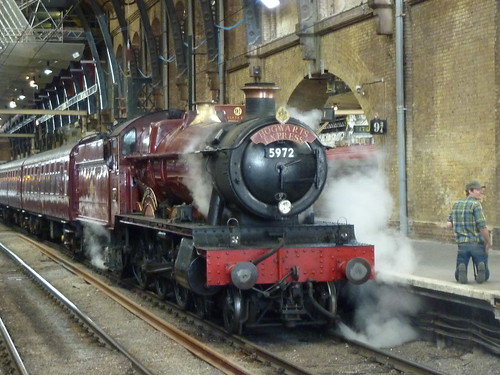 You can walk in the footsteps of Daniel Radcliffe, Emma Watson and Rupert Grint on the official Warner Bros. Studio Tour London. Located at Leavesden Studios where the movies were filmed, this walking tour takes fans behind-the-scenes to see original costumes and props.

Explore intricate sets and discover how the special effects and animatronics work. Walk past the shops on Diagon Alley, wander around the Great Hall, and visit Hagrid’s hut. This largely self-guided three-hour tour opens on March 31, 2012.

Head to Hogwarts… in Oxford!

Oxford University is already a world-famous city, but Harry Potter fans will find the city particularly interesting. Several colleges were used to film key scenes in the movies. Hogwarts hospital and the grand staircase to the dining room at Hogwarts are just a couple of locations Potter fanatics can visit.

Want to see the quad where Mad Eye Moody turned Malfoy into a ferret? Or the place where Ron learned to dance for the Yule Ball? You’ll see them all during a trip to Oxford. Companies like British Tours organise trips to Oxford and beyond for the wizard fan who wants to see it all.

Go to Godric’s Hollow … in Lacock!

One of the great things about going on a Harry Potter tour is that you get to see beautiful parts of the UK you might normally miss. Lacock is a perfect example. This small village in Wiltshire is the setting for Godric’s Hollow, where Harry’s parents James and Lily lived.

Visit Professor Slughorn’s house and take a peek at other key locations, like Professor Quirrell’s classroom. You can also take a trip to Gloucester Cathedral, site of Gryffindor Common Room. Many tour companies, like Brit Movie Tours, offer guided tours of Lacock and other Potter locations to help you get the most out of your visit.

London locations: From The Leaky Cauldron to Platform 9 ¾

If you only visit one city during your Harry Potter tour, make sure it’s London. There are so many familiar sights for fans, from Platform 9 ¾ at King’s Cross Station to Leadenhall Market, which was used for exterior shots of Diagon Alley.

Several other real-life buildings were used for magical moments. For example, Australia House was turned into Gringotts Wizarding Bank. As well as escorted tours, you can also take advantage of free information, such as the free self-guided walking tour provided by the website The Magician.

If you’ve really got the Potter bug once you’ve been on a tour, you might decide to live like the wizard boy himself. You can attend boarding school or choose to learn English at Alexanders School.

In addition to lots of studying and hard work, going on a Harry Potter tour can be a really fun way of getting ready to go away to school. This kind of boarding school preparation will be a delight!

Five “I Will Not Travel Without” Items